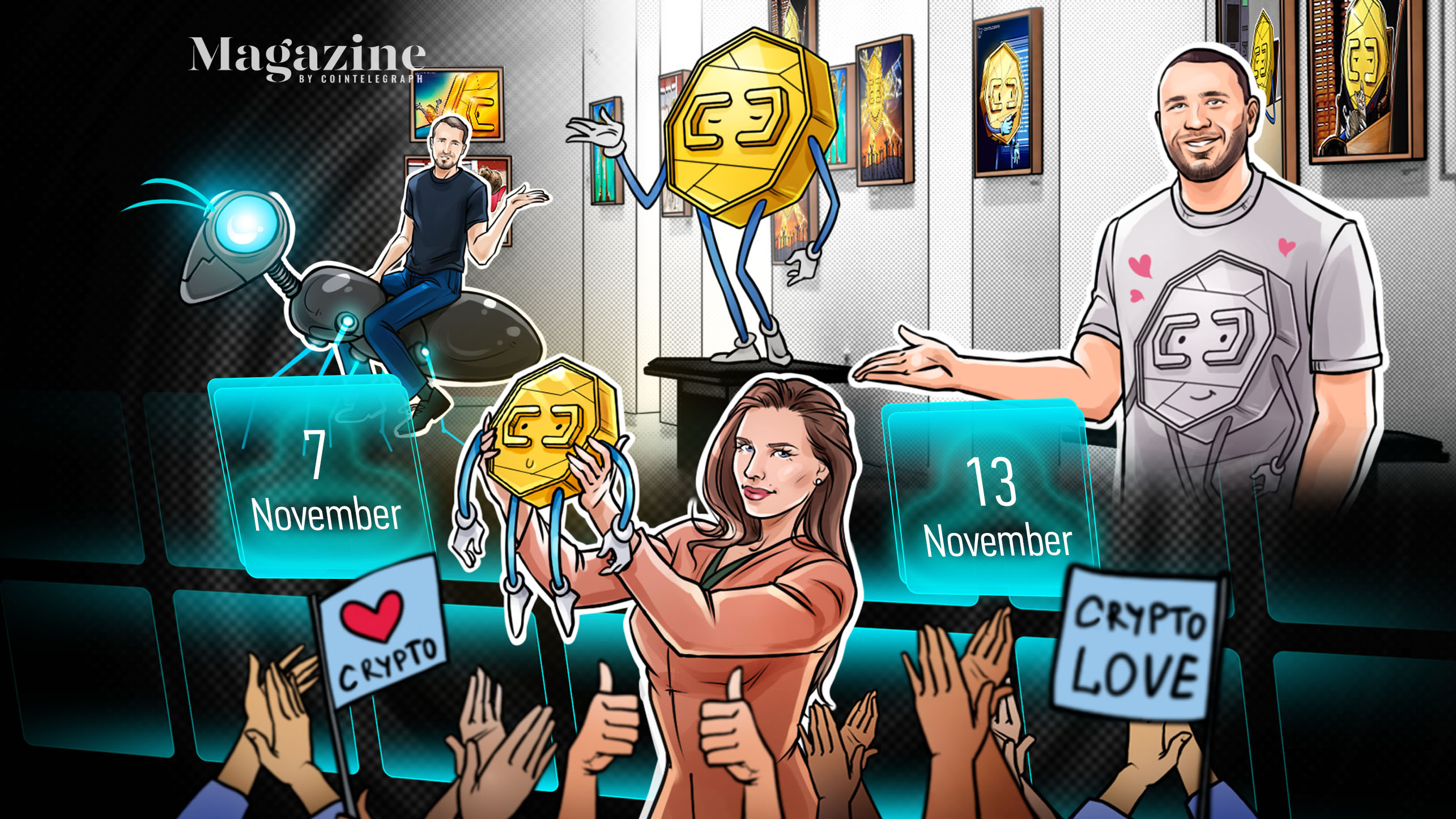 Coming every Saturday, Hodler’s Digest will help you track every single important news story that happened this week. The best (and worst) quotes, adoption and regulation highlights, leading coins, predictions and much more — a week on Cointelegraph in one link.

At the start of this week, the combined cryptocurrency market cap broke $3 trillion for the first time. The market has fluctuated heavily this year, previously topping out at $2.62 trillion during the height of the bull run in May, before crashing down to as low as $1.24 trillion in mid-July.

CoinGecko’s data tracks 10,418 digital assets across 518 cryptocurrency exchanges, and the surging momentum in the latter half of 2021 comes on the back of Bitcoin (BTC), Ether (ETH), Polkadot (DOT) and Solana (SOL) all pushing past new all-time highs.

Bitcoin still remains the dominant force in crypto, with its $1.21 trillion market cap being more than double that of second-ranked Ethereum at $550 billion. Meanwhile, the combined capitalization of all other crypto assets sits at roughly 40%, or $1.24 trillion.

On Tuesday, Mastercard announced that it will be launching crypto-linked payment cards across the Asia-Pacific region that will enable users to instantly convert their digital assets into fiat currency.

The cards are being launched in collaboration with three crypto service providers: Amber Group and Bitkub in Thailand, and CoinJar in Australia. Mastercard hasn’t outlined what crypto assets will be supported at this stage but did hint that Bitcoin and Ether would be at the top of the list.

“Rather than directly transferring cryptocurrencies to a merchant, cardholders will now be able to instantly convert their cryptocurrencies into traditional fiat currency which can be spent everywhere Mastercard is accepted around the world, both online and offline,” Mastercard said.

NewYorkCityCoin (NYCCoin) launched on Thursday, with Mayor-elect Eric Adams giving the coin’s issuers, CityCoins, a public endorsement ahead of the rollout. Adams stated last week that he wanted to have a CityCoin for NYC that mirrors Miami’s MiamiCoin.

While Adams welcomed the project to New York this week, CityCoins has yet to officially partner with the local government. It may want to do so soon, however, as the NYCCoin project will divert 30% of its mining rewards to a custodied reserve wallet that the local government can use to support whatever initiatives it chooses.

“We’re glad to welcome you to the global home of Web3! We’re counting on tech and innovation to help drive our city forward,” Adams said.

According to filings with the U.S. Securities and Exchange Commission, erratic billionaire and Tesla CEO Elon Musk offloaded more than 934,000 Tesla shares worth around $1.1 billion on Thursday.

Musk made around a 180% gain on his sold shares with an average sale price of around $1,170, marking his largest fire sale of Tesla stock to date. The CEO had teased a potential sale over the weekend after polling his 63 million Twitter followers about whether he should sell 10% of his Tesla stock. The poll was in response to public pushback against billionaires who may or may not have paid their fair share of tax.

This sale only accounted for 1% of Musk’s holdings, and the filings show that he planned to sell the stock as part of his tax obligations back in September. The world now awaits if he will sell another 9% to appease the 58% of respondents who voted “yes” to his poll.

Zimbabwe’s government was rumored to be looking at utilizing Bitcoin as a legal tender to meet growing demand in the country, according to local news outlets.

The news, reported on Nov. 7, suggested that discussions with local businesses are already underway. Retired Brigadier Colonel Charles Wekwete, permanent secretary and head of the e-government technology unit in the office of the president and cabinet, was confirmed as the source of the speculation.

A couple of days later, however, news also surfaced that Zimbabwe was not looking to adopt Bitcoin whatsoever, and was instead exploring central bank digital currencies (CBDCs). Zimbabwe’s minister of information, Monica Mutsvangwa, had the unfortunate job of quashing the rumors and providing a major buzzkill for Bitcoin maxis.

For more info on crypto prices, make sure to read Cointelegraph’s market analysis.

“For the second time in five months, we announced the seizure of digital proceeds of ransomware deployed by a transnational criminal group. This will not be the last time — the U.S. government will continue to aggressively pursue the entire ransomware ecosystem and increase our nation’s resilience to cyber threats.”

“If Apple were to add support for #Bitcoin to the iPhone and convert their treasury to a Bitcoin Standard, it would be worth at least a trillion dollars to their shareholders.”

“The crypto community is ambitious, daring and full of potential. Innovation is about synergy. It’s beyond technology and about people. It’s about us.”

“I believe that in the next three to five years, the DeFi industry will grow massively. It’s already growing rapidly, but the advantages of peer-to-peer technologies can and will be more widely experienced.”

“If the results of this ‘development’ phase conclude that the case for CBDC is made, and that it is operationally and technologically robust, then the earliest date for launch of a U.K. CBDC would be in the second half of the decade.”

The Bank of England

“We are taking a high degree of focus on issues surrounding the security of personal information and the digital yuan and have made relevant regulatory and technological adjustments to meet this objective. We have adopted a principle of anonymity for small transactions regarding the digital yuan and will only step in to regulate under the law for large transactions. When it comes to collecting personal data, we seek only to collect what is necessary and the minimum of what is legally required, which is far less than electronic payment apps of today.”

“It is not reasonable to build a financial system that demands investors also be sophisticated interpreters of complex code.”

“Crypto is becoming cultural, it’s becoming cool. […] It used to be that if you were investing in crypto, you were kind of weird.”

Prediction of the Week

Digital currency analyst Matthew Hyland recently tweeted his thoughts about Bitcoin’s potential upcoming price action. In short, his multi-tweet write-up essentially explained his prediction that BTC will surpass $100,000 on its way to $250,000, validating one popular price model and invalidating another.

The Stock-to-Flow (S2F) and Stock-to-Flow Cross-Asset (S2FX) price models, built by PlanB, a pseudonymous Twitter personality known for his Bitcoin analysis, each have price targets of upcoming relevancy. December 2021 should tap into a BTC price of at least $100,000 per coin, according to the S2F model. The S2FX model notes a price expectancy of around $288,000 per BTC before the next halving, which should occur in 2024.

The price models are based around Bitcoin’s block reward halving cycles. Bitcoin halvings occur every 210,000 blocks — which takes about four years. The time in between is the halving cycles.

Essentially, Hyland thinks BTC will keep pace with the S2F model in hitting $100,000, but the asset will only reach about $250,000 during the present halving cycle (concluding in 2024) — the result of big players selling early before $288,000. Big players will likely get retail investors hyped for BTC after $100,000 is reached in line with the S2F model, according to Hyland, leading those mainstream folks to look next toward the $288,000 price target of the S2FX model.

This week produced notable excitement in the Bitcoin price category. The asset turned in a new all-time high just below $69,000 before dropping slightly below $63,000, all on Wednesday, according to Cointelegraph’s BTC price index.

FUD of the Week

The Central Bank of Nigeria (CBN) was reportedly laying on the FUD this week after it ordered local commercial banks to freeze accounts tied to at least two crypto traders. The CBN banned banks from servicing local crypto exchanges over concerns of volatility, money laundering and terrorism financing.

Local media outlet Peoples Gazette reported the news on Nov. 7, stating that CBN’s director of banking supervision, J.Y. Mammanand, laid down the law, directing his bank to shut down the naughty crypto traders’ accounts and move their funds to “suspense accounts.”

The crackdown is reportedly part of a broader move from banking regulators to immediately close the accounts of Nigerian residents or companies “transacting in or operating cryptocurrency exchanges” using local banks, as CBN execs think that the majority of these transactions are nefarious.

Coinbase (COIN) shares promptly dipped around 13.1% in after-hours trading following the release of underwhelming third-quarter financial results on Thursday. The firm posted $1.235 billion worth of revenue in Q3, falling well below FactSet’s estimates of $1.614 billion.

The firm’s profits equated to $406 million, which marked a 74.7% decrease compared to the second quarter but did beat analysts’ expectations of $380 million. Coinbase also reported earnings of $1.62 per share, which came in 10% short of the consensus estimate. The firm appeared to be unfazed by the results, and the report highlighted that Coinbase is focused on the long term.

“Coinbase is not a quarter-to-quarter investment, but rather a long-term investment in the growth of the crypto economy and our ability to serve users through our products and services. We encourage our investors to take this point of view,” the report read.

An admin account for Beeple’s official Discord channel was hacked on Wednesday, resulting in a fake NFT drop being promoted to the group that saw users duped out of an estimated 38 ETH.

An admin account with the handle “Multi” confirmed to the group on Wednesday that their account had been compromised despite having two-factor authentication settings switched on. The hacker went on to impersonate an admin and the Beeple Announcements Bot, and promote a fake and “cheap” NFT drop from Beeple on Nifty Gateway.

The members of the group were expecting a cheap NFT drop to be released on the back of Beeple’s most recent $29 million auction, as the artist has done such a thing before to cater to all audiences. However, not only did the members partake in a fake drop, they didn’t even receive any NFTs for their trouble.

Latinx communities are driving forward adoption, as crypto is proven to meet their diverse needs in a way that traditional finance cannot.

Think of how essential the internet is to everyday life now — that’s what the Metaverse could become in a lot less time than the internet did.

Crypto kids fight Facebook for the soul of the Metaverse

“The Metaverse doesn’t start in virtual reality — it starts with ownership of assets, [the] ability for anyone to create and trade value.”