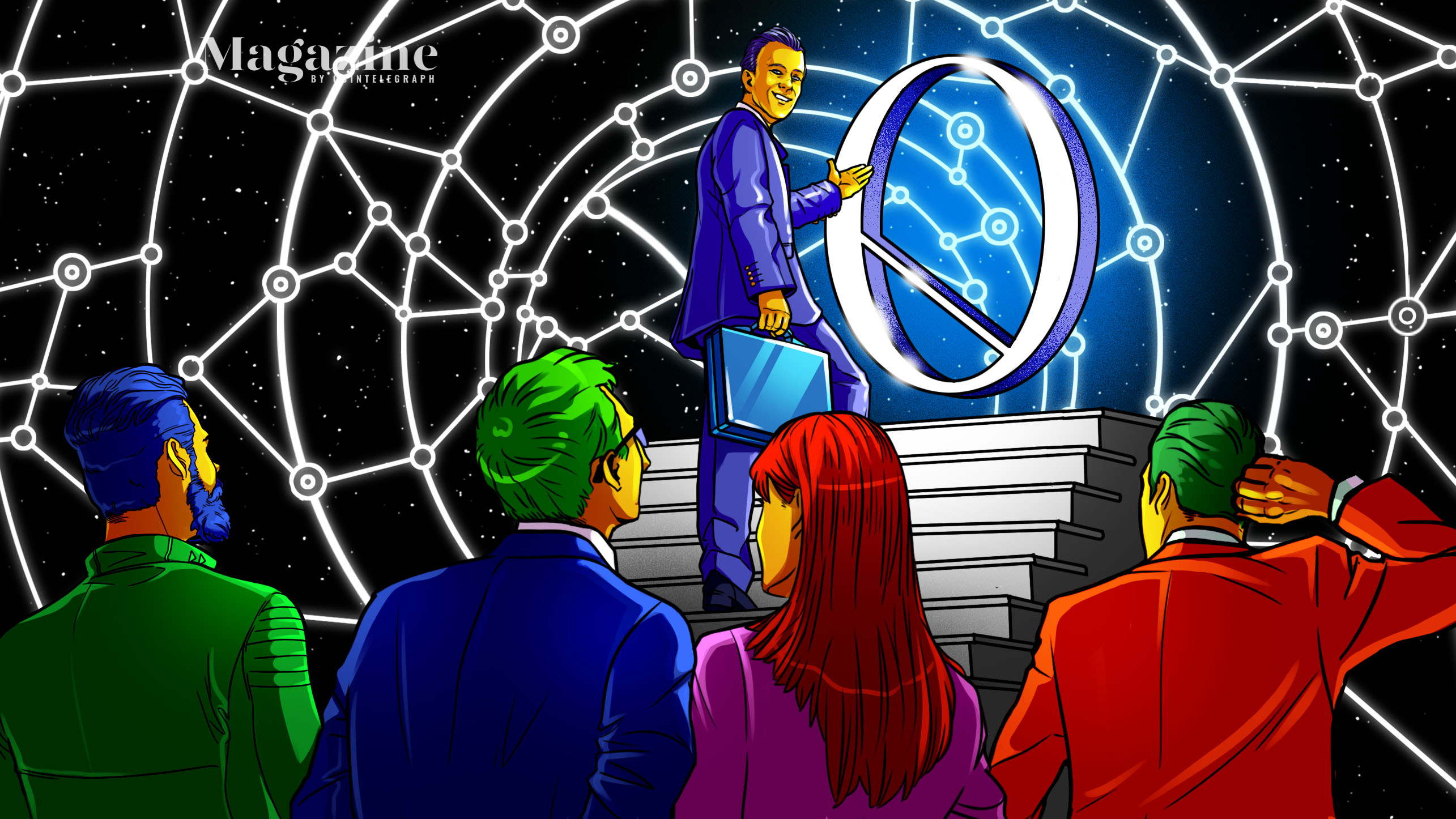 John Paller is training a new generation of blockchain workers and giving them the tools to live free from the chains of full-time employment.

After a chance conversation with a “Russian dude” wearing a weird T-shirt at a 2014 conference — Vitalik Buterin’s father, Dmitry — John Paller’s life was transformed by having a front-row seat for the birth of Ethereum. He went on to create the largest Ethereum hackathon and founded an initiative to help at-risk youth find job opportunities in the burgeoning crypto industry.

According to Paller, the majority of workers in the United States will be independent and not tied to a particular employer within just a few years from now. But with so many of the necessities of life provided by employers rather than the government, he has set up a new token-based employment co-op to provide independent contractors with benefits, such as medical insurance and retirement plans.

Growing up in the predominantly Mormon state of Utah, which he describes as “a rather dogmatic society,” Paller remembers that as a child, he “always asked too many questions.” Not feeling like he fit in, he moved east — over the Rocky Mountains — to Denver, Colorado a few years after graduating from Southern Utah University with a business administration degree in accounting and finance in 1997.

Denver, according to Paller, is “more pragmatic politically — we don’t get caught up in political dogma as much as other states seem to do.” This, he surmises, is due to a mixture of geographical and cultural influences, with a libertarian wild west culture from Wyoming in the north merging with a more “liberal, progressive” approach from the south in New Mexico and west from California.

“I think that Ethereum as a concept really relates well to this sort of egalitarian approach — building next-generation public infrastructure using smart contracts. We have a good tech scene here in Colorado.”

He serves as the executive steward of ETHDenver, which started with monthly meetups of “a couple dozen people” before growing into the hundreds suddenly in 2017. This rapid growth inspired him to organize a hackathon in February 2018, a project for which he called up various industry players, such as Ethereum co-founder Joe Lubin, cryptocurrency entrepreneur Erik Voorhees, and dozens of other top projects and luminaries.

“We were hoping for 401 people, and the reason for that was because ETH Waterloo in the fall of 2017 had 400 people, and we wanted to be the biggest one ever,” he says.

The first event, which Paller describes as “part Burning Man, part SXSW, part DevCon, and part Hack the North,” was a huge success with 1,500 participants. With four years running so far, the event has become a home turf of the Ethereum movement. “This year, we did a fully virtual event, and we hosted over 31,000 people from 94 countries,” Paller explains proudly, adding that ETHDenver is transitioning into a true community-owned ecosystem called SporkDAO with a virtual launch party and NFT auction on June 26.

Paller’s background is in human resources and finance, and in 2002, he co-founded a staffing company called PeoplePartners to focus on recruiting in the financial sector. After some success, the company managed to buy and merge with another, Lakeshore, where Paller continued to serve as CEO, while the new firm focused on HR technologies in what he refers to as the “Uber-for economy” — where the firm was trying to create an app that would help companies find talent as quickly as Uber finds rides.

Much of Paller’s vision for his HR firm revolved around a vague desire to help “democratize employment,” referring to what he saw as a lopsided social contract where employers have a huge amount of power over employees within U.S. society. Questions started to gnaw at him — Why is employment so disproportionate in power and value distribution? Why is healthcare in the United States tied to employment?

It was while reading more broadly into economics and game theory, in hopes of answering these questions, that Paller came across Bitcoin from a friend working at a technology startup who told him it was the future of money. “I read the white paper, and I kind of didn’t get it, but I bought some,” he recalls.

My name is Buterin, Dmitry Buterin

Buying some Bitcoin on a whim was, however, not Paller’s only harbinger of blockchain destiny. While attending a small entrepreneurship conference in California in early 2014, he met Dmitry Buterin. “There was only probably like 30 people there, so it was a very intimate affair, and he was the interesting, you know, Russian dude with the weird T-shirts,” he says. As fathers, they connected over their families and because “politically speaking, we’re both libertarians.”

Due to this chance connection, Paller had a direct line to Vitalik’s father, who made “social media posts on the Ethereum white paper and the ICO.” This meant that he had exposure to the project from an early stage and, in early 2016, asked Dmitry to connect him with his son, Vitalik, who “was kind enough to spend several hours with me talking about my ideas for use cases. In hindsight, he was very gracious because my use case ideas were terrible — I didn’t understand decentralization at all,” he recounts, adding that his mind was still stuck in the old world of centralized corporate structures.

He eventually did have “the lights go on,” at which point he decided to do a full pivot in life. “It was almost kind of like my version of a midlife crisis,” he explains regarding his sudden decision to sell his business, effectively turning his back on a successful career.

Apprentio and the next generation

In 2018, Paller co-created Apprentio in collaboration with a local boys and girls club in hopes of providing at-risk youth with opportunities in the emerging blockchain ecosystem. Paller believes that the commonly prescribed path of high school/college/degree/job is not for everyone, especially considering that a four-year college degree in the U.S. can easily result in $100,000 of debt, and the “graduation rate for at-risk youth kids that go to college is like 5% — most of them drop out,” he explains.

“We assist these kids — 15–17 years old — get involved in the blockchain technology space by participation in hackathons, building projects, mentoring, tutorials and free resources, and then ultimately hooking them up with projects that are looking for interns.”

In Paller’s view, Apprentio is investing in a new generation of specialized workers to fit the needs of the future — not only the needs of companies but of the workers themselves. With the ability to work remotely and for several projects at the same time, Paller envisions a future with workers who are empowered by choice — instead of being effectively held for ransom by employers who demand they work full time in one location in order to access the resources needed for survival.

The old model is simply not working for workers, as evidenced by the fact that “70% of people in the U.S. labor force are sitting in jobs they hate” because they have no better options. Of course, that is part of the problem — the reason Americans allow themselves to be “subjugated by a corporation” is that independent workers lack the security and benefits, such as retirement, health insurance and disability protection afforded to most full-time employees. This total dependence on the employer is a peculiarly American experience, seeing as healthcare, in particular, is seen as a universal right in much of the world, including Canada, Europe and Australia, to name a few.

According to Paller, the U.S. workforce currently has about 35 million self-employed workers out of a total of 160 million. The movement began in earnest, with many workers not returning to their traditional jobs after the 2008 financial crisis, and following a year of on and off shutdowns and working from home, the trend is only increasing.

“The rate of self-employment is accelerating even faster now due to the pandemic. The estimates are 90 million people by 2028 in the U.S. workforce alone.”

Though the share of independent workers is rising, Paller sees an untapped niche in the market for human resource systems. From data management to identity verification and credentialing, “all of it is designed with the corporation as the customer — they are farmers of talent and the talent is the product,” Paller explains.

On the blockchain side, the phenomenon of decentralized autonomous organizations, or DAOs, is set to benefit from, and offer opportunities to, this growing crop of independent workers. Play-to-earn games, the increasingly popular framework of blockchain games that allow players to make money within the economies of video games, are also set to burgeon.

All of this poses challenges for governments, which can benefit from the arrangement where most people have an ongoing, full-time job “because employment is a great way to make sure that taxes are paid,” whereas managing the reporting of independent contractors is much more difficult.

“Imagine a world where you work in 20 countries simultaneously with people that share your values, share your worldview, and you don’t have to worry about any of the jurisdictional compliance.”

Paller’s brainchild, Opolis, bills itself as “a member-owned digital employment cooperative” providing “benefits, payroll and shared services for the independent worker.” It’s his attempt to be part of the answer to the challenges of future work. By forming an “employment cooperative,” the vision is that workers can take back their agency from employers who previously defined their place in society.

The idea came to being in 2017, culminating in a white paper in 2019, followed by a year spent designing a micro-economy within the ecosystem. It is legally set up as a cooperative instead of a corporation or foundation, the latter of which Paller believes creates “no incentives to build anything of economic value.” As a Colorado cooperative, the entity’s participants are able to hold patronage tokens. The token itself, while potentially profit-bearing, is not a security, according to Paller.

The Opolis Trustee announces the completion of a $5M Series Seed II equity and grants funding round. We are grateful to partner with aligned DeFi projects, DAOs, Strategic Investors and Angel Investors to build the future of $WORK

Opolis — being set up in this way seems to be more than a mere legal loophole as a co-operative or co-op — is defined as “an autonomous association of persons united voluntarily to meet their common economic, social, and cultural needs and aspirations through a jointly-owned enterprise.” Paller quotes Dr. Nathan Schneider, a local professor who has commented on the intersection of DAO’s and co-ops, which hold many inherent similarities. He also notes that “there are European cooperatives that are worth billions, so I think we’re gonna see a whole new wave of cooperatives.”

On the ground level, Opolis is already operational and offers independent worker-members in the U.S. a host of services. The basics include health, dental and vision insurance available in various tiers to provide security for the worker, their spouses or entire families. For example, the combined health, dental and vision insurance premiums range from $313 to $557 per month for the worker alone, or from $1,125 to $1,845 for the whole family.

In addition to insurance, Opolis offers the opportunity to elect various retirement savings plans, methods to keep salary consistent even when taking time off, and tools to manage tax deductions for things such as wellness expenses.

The cooperative is currently operational in only the U.S., but Paller envisions that it could become a “global public utility” in a way similar to internet infrastructure or cryptocurrency networks.

“The goal is to become a global public utility infrastructure for employment — at that scale, it doesn’t even need a name — it would operate similarly to how people think about TCP IP or even Ethereum layer one. It’ll just be a thing that is and does.”