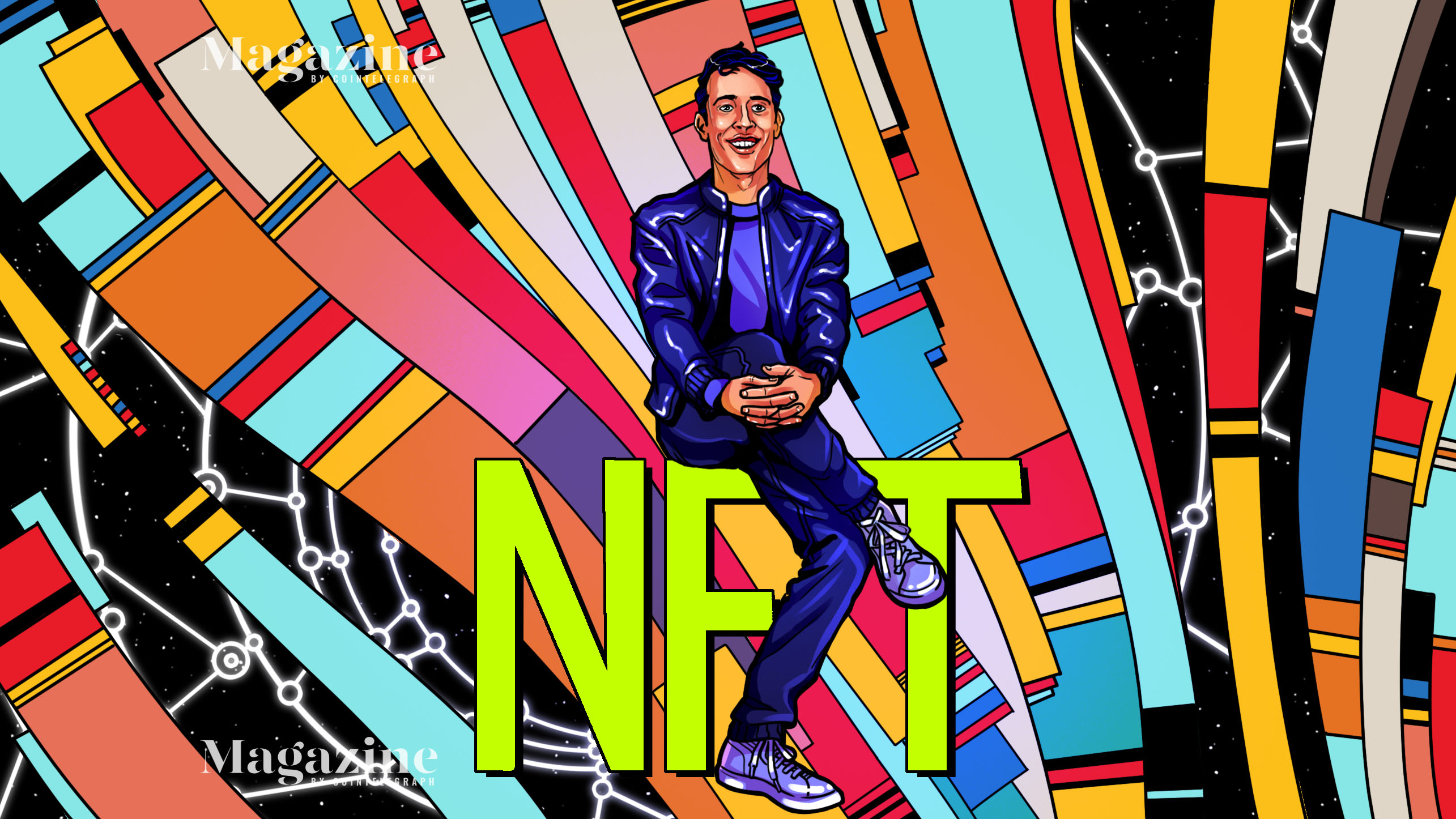 The computer scientist turned to generative artist Tyler Hobbs to write code in an artistic way, and then create visual art that has sold millions of dollars.

Fidenza is the brainchild of 34-year-old Tyler Hobbs, who quit his job in computer engineering to become a full-time artist. When he found out, he hit ETH Art building blocks, An art platform based on generative art to create NFT and become a curatorial artist.

The work was named after a small town in northern Italy, which Hobbs stumbled upon through Google Maps. Inspired by the abstract expressionist painter Francis Klein, Hobbes likes to use place names in his artwork because they have no burden or clear meaning.

A total of 999 works were “dropped” and sold out at a price of 0.17 ETH in 25 minutes, which is about US$400. Approximately $400,000 in sales is divided between Hobbs and Art Blocks at a ratio of 90/10. In the secondary market, mainly Opensea, his works have a pre-programmed 10% commission, and 5.0%/2.5%/2.5% is automatically shared between him, Art Blocks and Opensea. With an estimated 85 million second-hand sales, Hobbes has earned more than $4 million in commissions.

As a programmer, he feels that it is important to create art with the tools he knows, and ask people to ask “What is the difference between a human and a machine?”

Hobbs said buyers come from all over the world, and the most common are middle-aged men. These basically inexperienced art collectors from the world of cryptocurrency or technology “have less inherent prejudice against this artwork”, while many traditionalists “feel that his style is inherently human or unreal.”

“They are usually interested in art and are willing to spend considerable money on unproven things-I think it takes a special kind of person to be that kind of collector.”

The mechanism for generating artwork on Art Blocks is unique because the artwork does not exist before the buyer “casts” it. The minting started at the pre-announced time and Art Blocks advertised it. At the time of casting, the buyer pays a pre-determined price in ETH and the necessary gas fee, and receives the artwork when the artwork is produced-in the case of Fidenza, this takes up to 30 seconds.

The code to create the artwork on the blockchain uses the random transaction hash of the buyer’s transaction as input. Then interpret this string of data through the code, and assign artworks with various overlapping features according to the parameters pre-programmed by the artist to generate artworks in real time.Like a Sperm fertilizes an eggThe contribution of the Mint is a unique, direct and necessary part of the art equation.

Some “super dense” Fidenzas maximize visual noise levels. They may be overwhelming at first, but if you sit with them, they will have their own charm. pic.twitter.com/vRGOWWk1gi

Because the code is Fidenza On the blockchain, anyone can use it to create similar works. However, since “Fidenza” is limited to 999 numbered copies, such “pirated Fidenzas” will not be “signed” by the artist-just like someone has copied the artist’s style with the same materials and tools.

Although Hobbes believes that it is “interesting for people to be able to explore the algorithm” and appreciate the aesthetic value it can create, he made it clear that his vision for Fidenza is now complete. “I think 999 is a perfect test run of the algorithm, it captures everything I would have liked it to capture,” he said, adding that he likes to have “clear beginnings and clear endings.”

Due to the unfalsifiable nature of blockchain provenance, he doesn’t care about fakes, but admits that someone can sell them as unofficial Fidenzas. Although he could not be sure of the legality of doing so, he found that the idea of ​​other people joining the program for profit is unethical and disrespectful.

CryptopunkIt is one of the first and most famous NFT collections, and is the “victim” of this duplication. Although the “floor” of one of the 10,000 original Punks (the cheapest NFT listed in the series) is about 100 ETH, the “Phunk” facing the other side only requires 0.04 ETH. “Zunk’s” is 0.05 ETH, “HD Punks” is 0.02 ETH, and “Bastard Gan Punks” is a considerable 0.50 ETH. If imitation is flattery, it can be said that these copies will only affirm and increase the value of “real” punk.

Hobbs grew up in Texas, dabbled in sports and various music, and often spent time “hand-drawn comic books.” He wanted to go to art school, “but for pragmatic reasons, my father persuaded me to switch to computer science.” He completed his bachelor’s degree at the University of Texas at Austin.

After graduating in 2010, he found a job as a computer engineer at the database company DataStax, where he focused on “open source, high-performance databases.” Hobbs is very satisfied, thinking that programming is “a good job I hope” and will work in the company until 2017.

Hobbs tried a variety of art styles, including “traditional art”, because he mentioned his oil paintings and figure paintings. However, these time-honored artistic traditions lack close ties with the artist himself, a computer scientist in the 21st century.

The Bouldin Creek mural is the predecessor of Fidenza. Now I am looking for the right person to paint the colorful Fidenza style mural! pic.twitter.com/IIqg6BYABp

Hobbes believes that to create extraordinary art, the connection between art and the artist and their unique skills is important because “that’s where you can say the most interesting things.” This can be seen throughout history—from Hunters of the Stone Age painted their game images on the walls of their residences, to people like Leonardo, their figure paintings were based on his research on human anatomy.

While looking for a personal connection with his art, Hobbs found Generative art Genre: Art created in a way that an autonomous system “can independently determine the characteristics of a work of art, otherwise these characteristics will require the artist to make direct decisions.” As programming approaches his heart, the gears begin to spin.

“I began to wonder if I could write a program to create a painting.”

Beginning in 2014, Hobbs began to “use tools that weren’t designed for making art at all, but the results I got were artistically interesting,” he recalled, referring to his early experiments on generative art. He found these results “more interesting than the paintings I made”, which inspired him to continue to develop his methods.

By 2017, he had enough confidence and savings to quit his job and concentrate on art, creating 100 works every year. It is difficult to make a living by selling prints and commissions, because it is far lower than his income as an engineer.

Under financial pressure and loneliness, he founded Travel Boss in 2018 with some former colleagues, a start-up company focused on business travel, where he worked part-time to make room for art. Due to the pandemic, the company closed at the beginning of this year.

Unemployment is a blessing in disguise, because around this time in February 2021, he discovered Artblocks. Although he had “general knowledge” of blockchain technology before, he admitted that he had never been interested in working in the industry or investing in cryptocurrencies.

“In general, I was skeptical of NFTs until I heard about Art Blocks. Art Blocks completely changed my view because it is particularly suitable for generating art.”

Hobbes considers Art building blocks He said that it has been struggling since its inception in the 1960s. Since the audience is willing to play a direct role in the creation of the generative art they purchase, the final product fits the market.

The curatorial stream is the most prestigious. After a long review process, the platform’s curatorial committee selected artists. Hobbes applied to be a curatorial artist because “I know this artwork is good, and I have a relatively good record of making good works and have a good network,” he confidently said.

The initial income from casting changed Hobbs’ life because it “means that I can continue to work full-time in art” for several years, even if the secondary sales are zero. Although he has sold most of the ETH, he still holds a large position, which he suspects will appreciate.

Currently, he spends most of his time in contact with collectors, who naturally hope to establish relationships with artists who have millions of dollars in works. Behind him is a pile of rolled up Fidenza prints, which he is shipping. “I allow the owner to order prints, but only for one print,” he clarified, explaining that he only charges a reasonable printing cost of up to $600-which is trivial considering the floor is about $800,000.

These days, Twitter has developed very rapidly for me (all of us?). Thank you for your patience in my efforts to reply to everyone. Soon (ish) I will start publishing regularly again ;). In the meantime, check out my recent article: https://t.co/ezz2r9IjuU

Although Hobbes will certainly continue his daily art practice, his next move will be more deliberate.He intends to change the process of publishing early sketches when he is working, instead of starting from the finished product and then showing part of the work

“I am 100% focused on publishing high-quality works,” he said. Although he is not in a hurry, he hopes to surpass himself again in art.

“I know this is a high standard, but I do feel that I can meet or exceed it in the future-at least in terms of how I view the quality of work.”