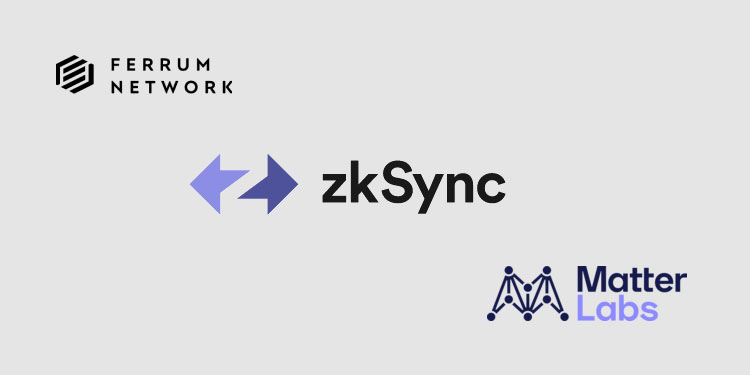 Ferrum Network, a cross-blockchain service company & ecosystemannounced it will integrate the zkSync layer-2 scaling solution into its suite of products. This synergy comes following Ferrum’s participation in the Series B round for Matter Labs, creator of zkSync.

zkSync is a user-centric zero-knowledge (ZK)-rollup platform for Ethereum and is live on the mainnet.

Matter Labs is a pioneer of zero-knowledge rollups. The organization launched the first-ever public ZK-rollup prototype in early 2019, was the first to implement recursive ZK proofs on Ethereum, and created the world’s first practical FPGA-based hardware for ZKP acceleration in 2020.

“When you really think about it, most of us in this space are here because of Ethereum. Ferrum’s mission has always been to breakdown barriers to mass adoption… and scaling Ethereum is one of the most important milestones in doing so. It’s a bit poetic to have zkSync — a project uniquely positioned to scale Ethereum — as our first official Ferrum Ventures investment.”
– Ian Friend, Co-Founder & COO at Ferrum Network

Integration of zkSync with Ferrum Network

Ferrum will be integrating its Staking-as-a-Service products with zkSync, there products include:

These products can foster an enormous amount of TVL on the network and provide a layer of utility for all projects who choose to deploy them.

Secondly, Ferrum will be integrating its multi-chain aggregator — InfinitySwap with zkSync.

This will allow for multi-chain swaps for assets deployed on zkSync making these assets more composable and helping to port liquidity to the network. InfinitySwap will look to source the volume transacted across the protocol by leveraging the LPs of DEXs on the zkSync network.

The ultimate goal of InfinitySwap is to become a smart routing multi-chain aggregator that solves the problem of fragmented liquidity by routing fractionalized transactions toward optimal arbitrage opportunities across multiple networks and DEXs.

“At Matter Labs, we’re humbled by the talented teams that wish to work with us in helping usher in the future of open finance. We considered Ferrum Ventures to be a talented team strongly aligned with our mission and values, and look forward to witnessing the impact they’ll have.”
– Tyler Perkins, CMO at Matter Labs

Ferrum Network will also extend the benefits of zkSync further across its ecosystem:

“We couldn’t be more thrilled to be joining forces with Matter Labs and zkSync as they embark on a mission to scale Ethereum. We’ll look to facilitate the process via our stake through Ferrum Ventures, our suite of products, and introducing them to the Iron Alliance. Stay tuned!”
– The Ferrum Network Team